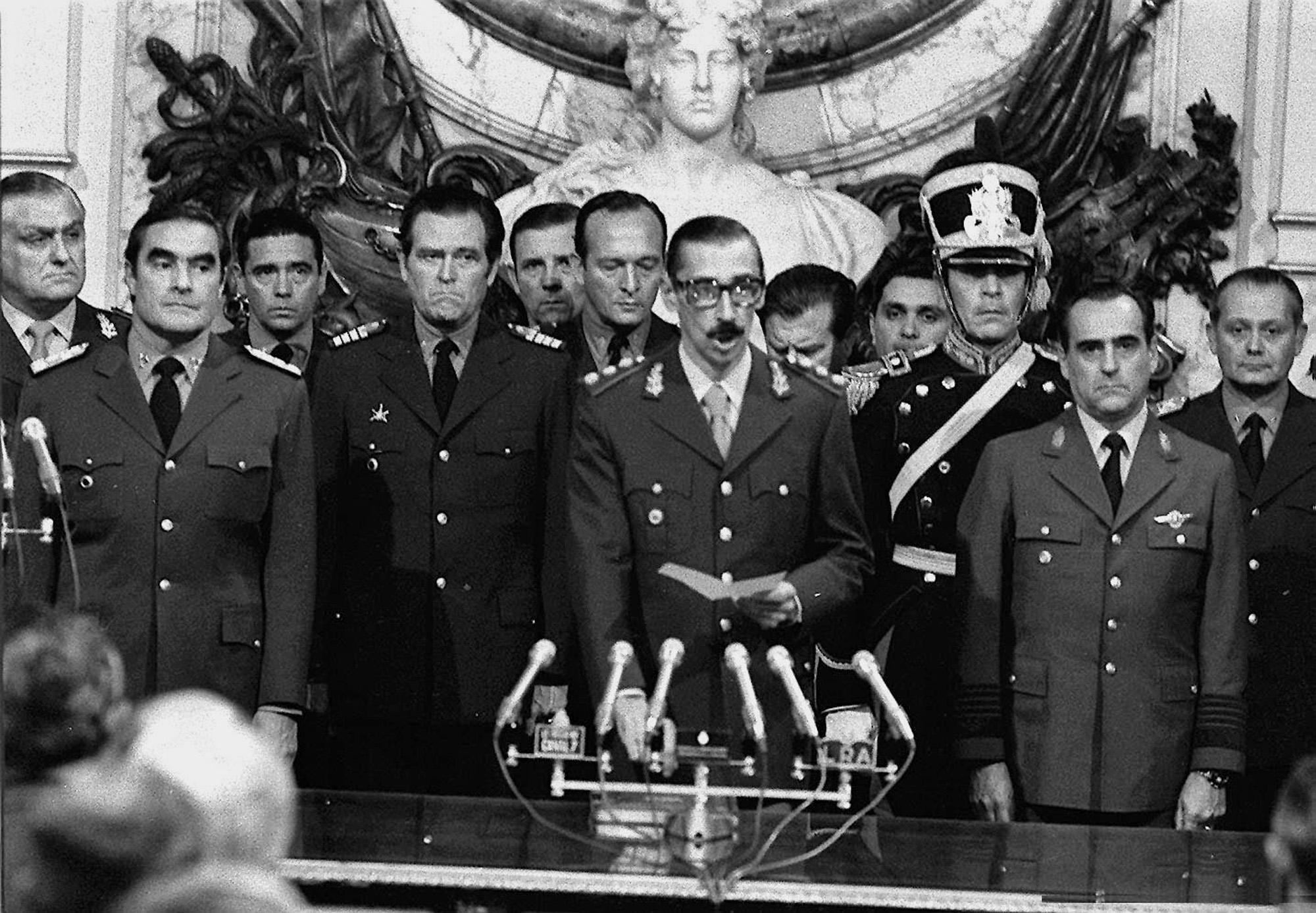 Twilight Struggle is a 2-player boardgame where players contend for global domination either as the US or the USSR during the Cold War. It’s my favorite boardgame because its game design captured the geopolitical dynamics of the Cold War really well. Today I want to look at one of the core features of the game: Stability Number. 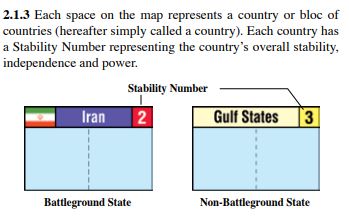 To win the game, the player should aim to control as many countries as possible by placing Influence into them. Stability Number determines how many Influence points are required for control of a country (it ranges from 1 to 5.) The higher the country’s Stability is, the more Influence a player needs to invest in that country to control it. But, higher Stability also means it’s easier for a player to maintain control of a country throughout the game because the cost is higher for the opponent to attempt to break your control and “flip” the country to their side. After the initial stage of the game, the game mechanics incentivize players to contest for control in less stable countries through influence operations, military coups or realignment.

The design of Stability Number is deeply rooted in the real world the game is trying to emulate. Just like in the game, the geopolitical flashpoints of the real Cold War like civil wars, revolutions and coups occurred mostly in countries in the Third World, where the Americans and the Soviets often tried to outmaneuver each other by supporting regimes friendly to their ideologies and foreign policies. One of the most popular “coup targets” in the early stage of the game is Iran, because it is a crucial country to control for various reasons and it only has 2 Stability. Indeed, in 1953 the Americans and the British supported a coup against the elected Iranian government to install a pro-Western regime under Mohammad Reza Shah Pahlavi.

I couldn’t find any Twilight Struggle datasets so I collected a table of TS Countries and their Stability Number (it’s on Github.) This is what the data looks like: 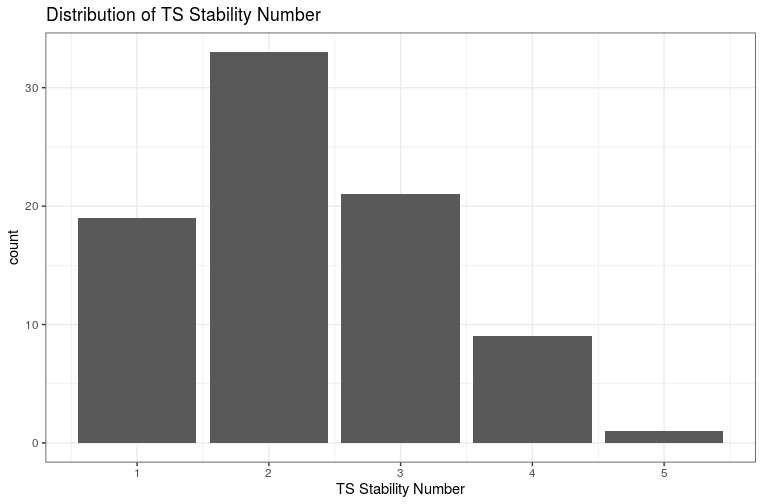 How does one measure regime stability? I don’t have a good answer but my intuition is that a stable country should have few regime changes and its regime should survive for a long period. So I googled “regime change dataset” and found an autocratic regimes dataset by Geddes, Wright, and Frantz that includes data on regime breakdown and regime duration. Even though it focuses on autocratic regimes, it still covers all countries including democracies which is good for my analysis. Luckily, there is a R package democracyData created by Dr. Xavier Marquez containing this dataset so I can load it in R with little effort. Open source software for the win!

I also wanted to include an alternative measure of regime stability that counts the number of coups d’etat in a country because the GWF dataset measures regime changes, which include coups but also other types of regime change like foreign occupation or peaceful democratic transition. I wanted to focus on coups because Coup is a core feature of TS where a player attempts to bring a country to their control based on the result of a dice roll. I settled on the coup d’etat dataset by Powell and Thyne. Here is a geographical breakdown of the data from their paper Global Instances of Coups from 1950-Present: 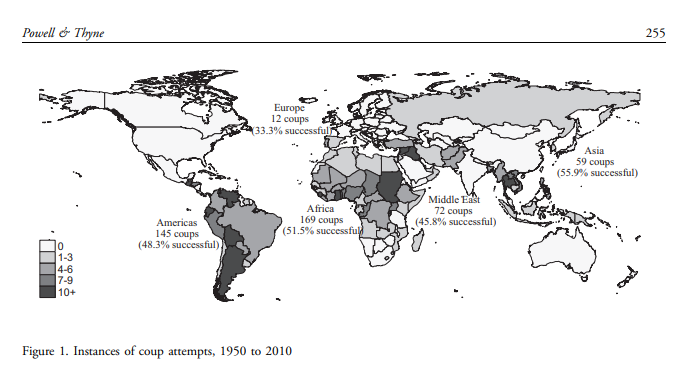 To summarize, I will look at 3 measures of a country’s regime stability to evaluate TS Stability Number:

I won’t go into details about how data was prepped for analysis as they were fairly standard procedures using the dplyr package in R. The major challenge was standardizing country names between the 3 datasets so they could be joined together on a country level. I created a file mapping the country names in the 2 external datasets to TS country names. In addition to resolving 1-to-1 mappings between country names, this also helped to resolve many-to-1 mappings. This is because in TS, some “Countries” actually contain multiple countries.

I kept only observations during 1945-1989, which is the historical period TS is based on. After this step, the columns in the external datasets can be aggregated on the country level to obtain the 3 measures of regime stability. I’ll briefly mention the sources of the 3 aggregated measures: 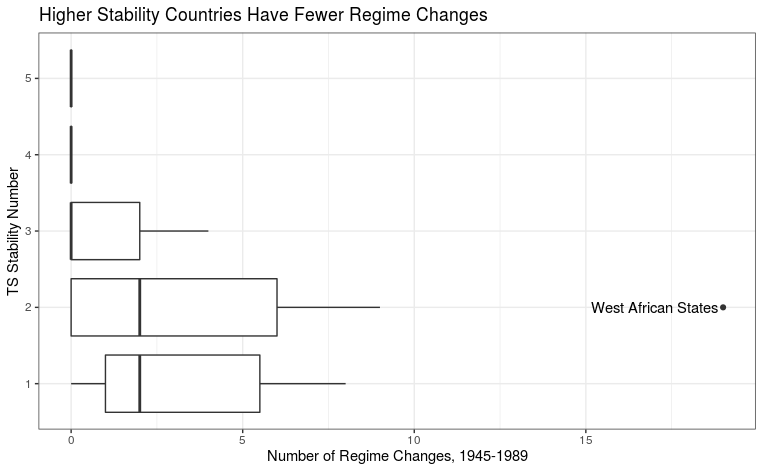 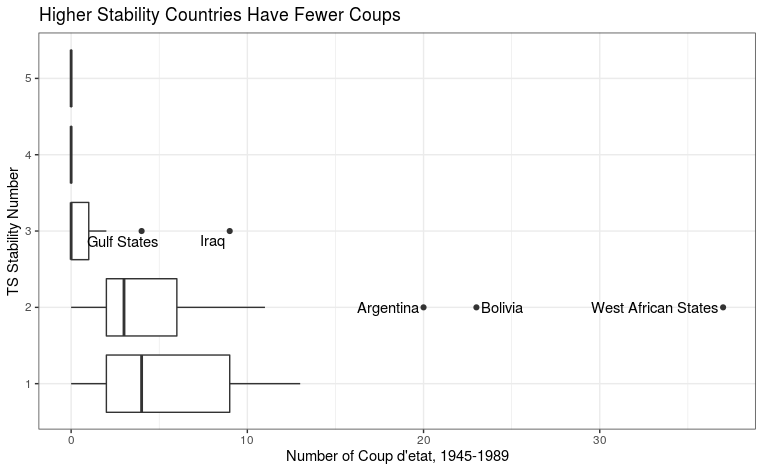 The coup d’etat data largely follows the same trend as regime change. Among the outliers, Gulf States and West African States contain multiple countries, whereas Iraq, Argentina and Bolivia just have a long history of military intervention in government.

Iraq is interesting because it has 3 Stability and 9 coups, whereas Syria, Egypt and Libya, similar Arab countries where the military played a great role in the government, all have 2 Stability. Based on the high number of coups a case can be made that Iraq should be a 2-Stability country. 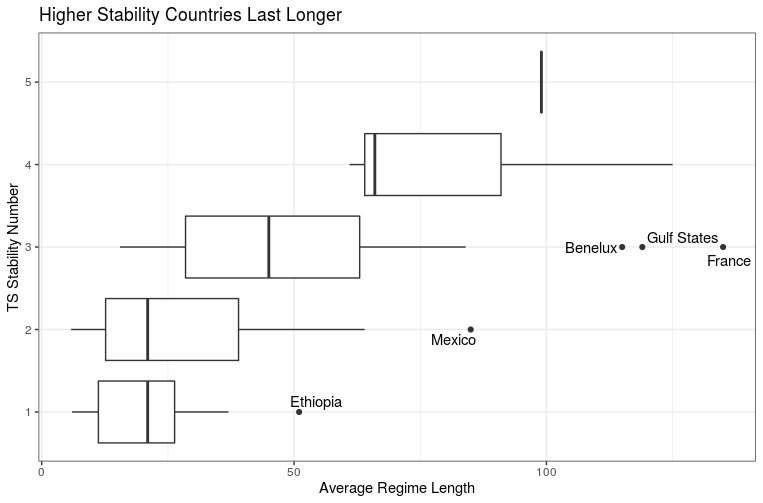 There is also a clear trend that countries with higher Stability Numbers tend to have longer regime lengths, though differences between 1-Stability and 2-Stability countries are less significant.

Among the outliers Ethiopia, Benelux and Gulf States (Oman) have / had enduring monarchies. Unlike the other two, the Ethiopian monarchy was overthrown by a coup in 1974 and the country was embroiled in a civil war until the 90s so its Stability Number of 1 seems reasonable. Despite only having a Stability Number of 2, Mexico was governed by the Institutional Revolutionary Party for 71 straight years until 2000! I don’t see why it shouldn’t have 3 Stability considering its Central American neighbor Cuba does.

Also, note in the GWF dataset France has a longer regime length than the UK. This is an idiosyncratic aspect of the dataset. According to it, the current French regime started in 1875 while the current British regime started in 1911. Certainly an alternative viewpoint could push the start of the British regime a few hundred years back while pushing the start of the French regime further to the present (in 1875 it was the Third Republic and we’re at the Fifth Republic now.) This is probably due to one criterion for the end of an old regime and the beginning of a new one in the dataset, from Autocratic Breakdown and Regime Transitions: A New Data Set:

“The ruling group markedly changes the basic rules for choosing leaders and policies such that the identity of the group from which leaders can be chosen or the group that can select major policies changes.” 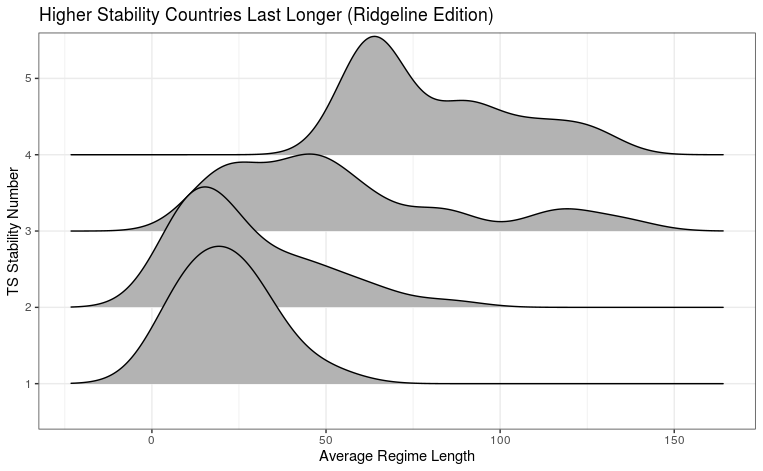 This ridgeline plot shows the same data as the previous boxplot. Just thought it looks nice.

Overall the Stability Number design of Twilight Struggle is pretty on point. Combined with other designs of the game, Stability Number incentivizes rational players to invest more energy in less stable countries in the Third World, so there won’t be insane scenarios like the USSR plotting to turn Britain communist in a game, which is good for simulating the Cold War. I won’t say it’s perfect, but obviously there’s more to designing a well-balanced boardgame than trying to meticulously capture the geopolitical realities of the Cold War (though the game does a pretty good job at that too.)

For more about Twilight Struggle’s design, I recommend this 538 piece.