20 Years of NBA Trades, Part I 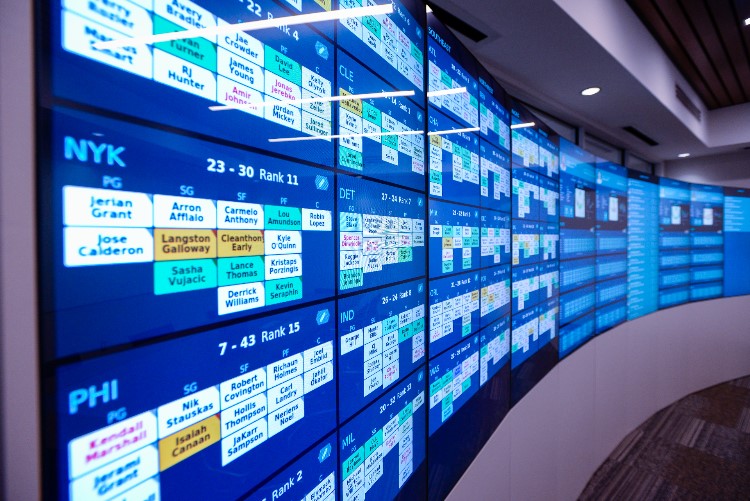 The first month of 2021 saw the blockbuster trade that sent NBA superstar James Harden from the Houston Rockets to the Brooklyn Nets. For many years, players came in and then out of the revolving door that was Daryl Morey’s Rockets, but there was never a question who was the at the core of it all, the immovable piece. The Rockets had always been Harden’s team, until now. It was the end of an era, which began in 2012 when Harden arrived at Houston, of course, via another trade. So I think now is a fitting time to look back at all the trades, both big and small, that had shaped the league for the past 20 years.

I relied on Pro Sports Transactions to collect all the trades each team made in the past 20 seasons, put them in a SQLite database and fired up R to make sense of the data. I wanted to start with some basic analysis, like how did the number of trades vary between months: 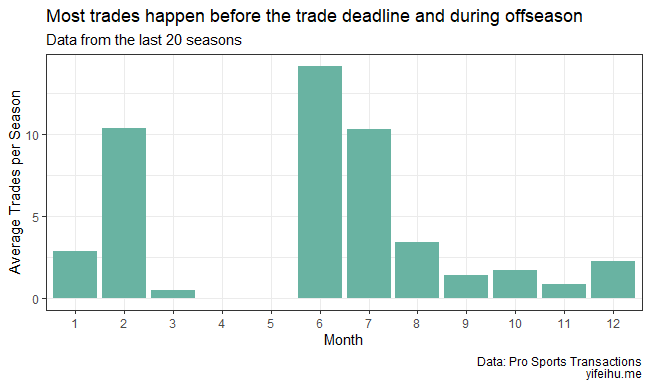 This chart shows the average number of trades made in each month per season, using data from the last 20 seasons. The pattern is not particularly surprising. Teams make most of their trades during offseason in the summer to rebuild their rosters for the new season. During the regular season, most trades take place in February, the month where the trade deadline usually lies (the noted exception being the shortened 2011-2012 season, when the trade deadline was in March.)

This next chart shows the total number of trades of each season1 in the past 20 years: 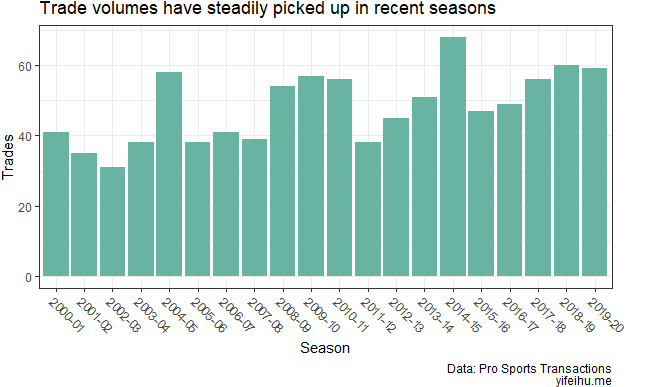 I have yet to find a single structural factor to explain the ebbs and flows of trade volumes at the league level between seasons. If we look at the 2014-15 season, which has the highest number of trades, we find that there are some teams that just happened to make many trades in that same season:

The Cavs, which made 9 trades in total, traded to clear enough cap space to sign Lebron James, and then traded to acquire Kevin Love, J.R. Smith, Iman Shumpert and Timofey Mozgov to build a competitive roster around James. Two other teams, the Celtics and the 76ers, also made many trades (11 and 15 respectively.) Unlike the championship chasing Cavs, these two teams were in rebuild mode and many of their trades were moves to acquire future draft picks. In fact, the Celtics’ trading spree had earned them notoriety. Instead of trying to understand the shifting pattern of trades at the league level, perhaps we would look at the more interesting question as to why individual teams make more or fewer trades in a particular season. This is something I may examine in the future.